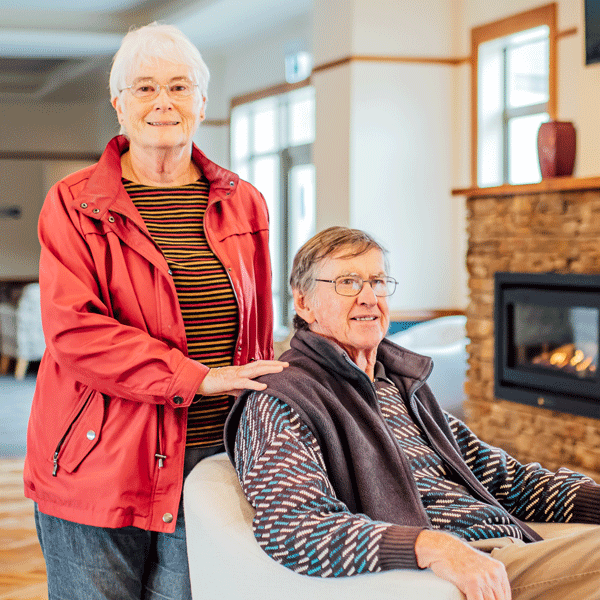 We’d sold our house and were looking to downsize, and you know, I said, “I’m not going to live in a retirement home!” you know, the normal thing. But Wayne called it a lifestyle village, and I liked what I saw because he left parklike areas everywhere; there’s plenty of space.

We were looking for something that was going to be our final place. The buildings that Wayne put up were really well thought out, and they were designed for people in retirement, the proportions and size of everything was fantastic. It’s so cheap to live here with everything included in the weekly fee, and it’s capped, so we know it won’t go up - that’s great security.

The thing that’s nice about it is that the residents who’ve moved in here have actually set the tone of the place with their interests and activities, and we’re not being led around by someone. We’re all still very active; we’ve got our outside interests. We always watch out for each other, but we’re not living in one another's pockets.

When you look at the layout, it’s not cramped; it’s parklike, it’s terrific you can walk around. The biggest problem here is that when you go for a walk instead of taking an hour, it could take up to 2 hours because everyone stops and talks to you, everyone’s so friendly. It’s just been fantastic. To think when I moved in, I was all grumpy, “I’m not going into a retirement village!” - but it hasn’t worked out like that.

Our kids love it. In fact, some of them are dying to get in here themselves now that they’ve reached over that 50-year mark. They wish there were places like this for them.