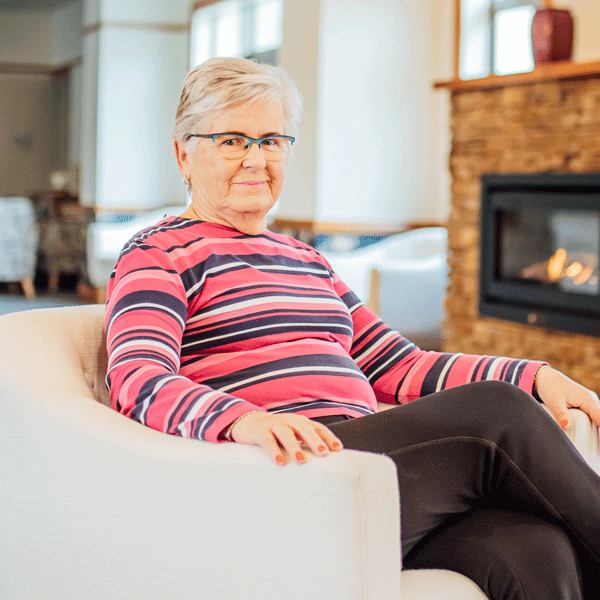 We hadn’t even given it a second thought but my husband’s sister was here and we used to pop up and see her. The more we came up, I said to my husband, "I could shift up there in a heartbeat." He said, "oh, could you?!" But he wasn’t keen, so we left it. It's something you both have to want to do.

He was a fisherman and fished in Paraparaumu for a long time. That was what he was afraid of leaving, his first love - fishing. He’s only got a little boat now but he’s putting it on the market to sell it. Partly because there’s so much to do since we've been here that he doesn’t use it! He’s just got so much to do, playing golf, and he’s rebuilding a 1948 Bedford truck down in the creative resource centre.

I have a ball. I go to 2 exercise classes a week, line dancing, family history, garden club, book club. There’s just so much to do. On Mondays, it's coffee at The George with the golf wives. We lived in our last house for 12 years and I only knew one neighbour, it sounds so sad doesn’t it? But here I think I just about know everybody in the village.

I had an elderly aunt I was very close to who has since passed away. She said to me, "don’t leave it too long to go into a village like that, go in when you can still have fun," and oh, she was so right. These places are places to come and have fun. And you do here.

You get a lot of support. Even though it’s not a retirement village, it’s lifestyle living, independent living. But when my husband had a stroke, I had so much support from people here I couldn’t believe it. The staff were absolutely amazing. And I feel safe here, so being in the house on my own didn’t bother me.

I had no hesitations whatsoever when I came in here. My husband probably more. I’m more of a social person than he is. But he’s changed since we’ve come in; he thinks it’s the best thing we’ve done.